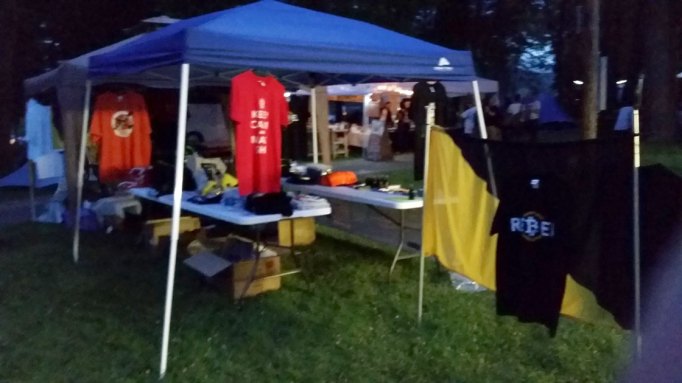 This is the Bitcoin Not Bombs store. They sell Bitcoin-related attire- mostly T-shirts and badges. I took a photo of this shop at night after the shopkeeper had already called it a day. He just left his stuff there overnight. Why? Because that’s just the culture of Porcfest! People are comfortable leaving their stuff there.

Lots of pro-freedom stuff was for sale. Stickers, badges, buttons. One of the shops had hemp-based food. Isn’t it a shame that selling stuff with hemp is a sign of rebellion? 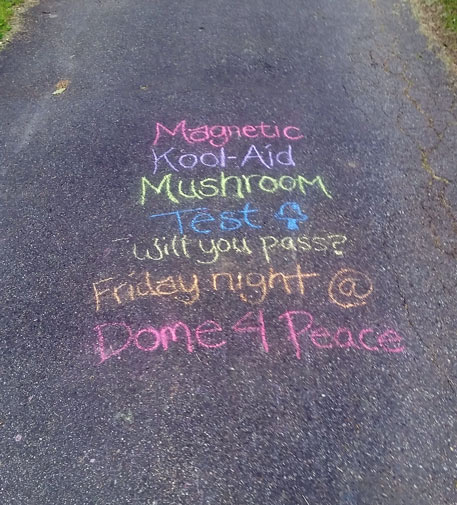 What was going on here? What does it mean? The Dome was a closed-off section of PorcFest, who knows…

The campsites were all connected by chains of asphalt path. Chalking was quite prevalent. There were hopscotches and fun drawings. People also took advantage of the asphalt for practical and informative purposes, as indicated by the photo on the left. 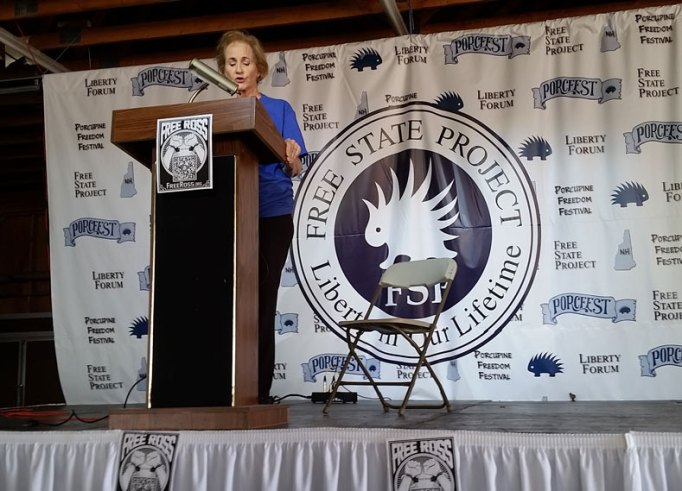 Lyn Ulbricht is the mother of Ross Ulbricht, the man accused of running the Silk Road.

One of the panels titled “The Impact of the Silk Road Case on 21st Century Law”. The speaker explained why her son’s trial will be very important. That is, once the trial actually happens. He has been locked up since last October. The prosecutor claimed that he should remain locked up because he is “dangerous”, even though he is not charged with the commission of any kind of violent crime. The government is either dishonest or they don’t know how technology works (or a some mix of both). The allegations made against Ross and the statutes he is charged with violating do not match. Lyn explained this during the speech quite thoroughly. 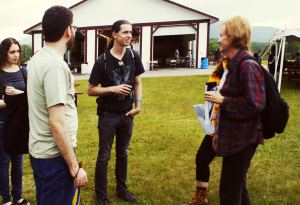 Lyn Ulbricht handed out “Free Ross” flyers to PorcFest attendees. They had QR codes on them that contained the Free Ross Bitcoin address for his defense fund. (photo by Tennyson McCalla)

If the creator of Silk Road can be locked up because of the activities that are occurring on his site, then, potentially anyone can be sent to prison because of things that users on doing on their sites. If the creator of Silk Road can be convicted of money laundering, then potentially anyone can be accused of money laundering if they are running a website in which Bitcoin is used as a medium of exchange. In addition, the legal definition of what constitutes money could be revised, because the IRS has ruled that Bitcoin is not money (Bitcoin is money in the real world, but in “legal land” it’s not).

Lyn claims that she is not wealthy and thus has had good reason to request donations. This case is important. She said that if everyone at Porcfest donated a small amount of Bitcoin, they might have enough to reach their donation goal. You will see the address to send donations by going to freeross.org 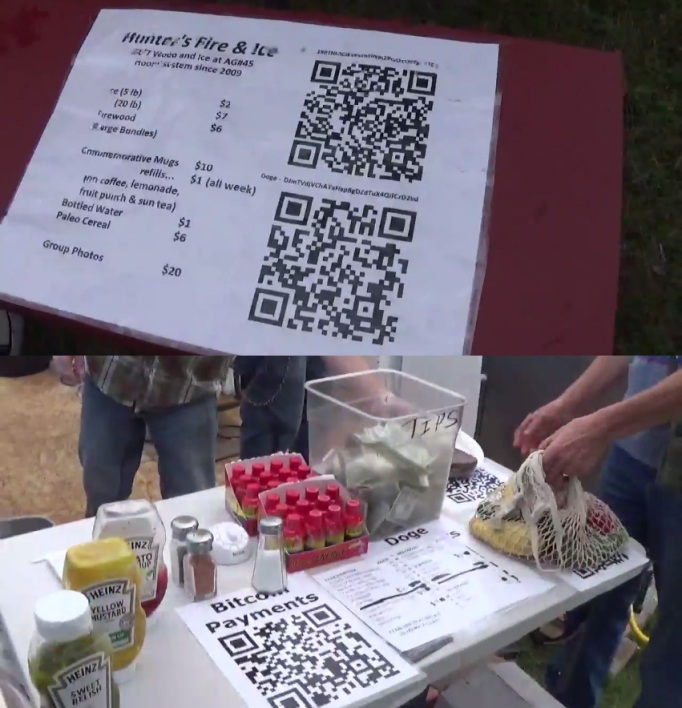 Dogecoin, the cryptocurrency which is a derivative of Litecoin and is based on the internet fad known as “Doge” was accepted at multiple shops at Porcfest.

A variety of food items were available for Dogecoin, including bacon, burgers, beans, fries, paleo cereal, fruit juices, and pancakes. 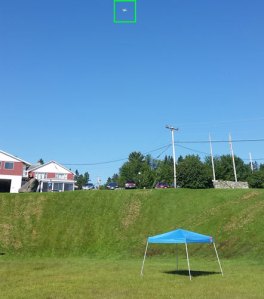 In the sky! It’s a drone! Don’t worry though, we’re non-aggressionists. Or libertarians? anti-statists? anarchists? kindergartenists? voluntaryists? what? But anyway, whatever, point is- it’s not weaponized.

I showed up to the campsite on Saturday night (the 21st) which was technically before PorcFest started, so the food options were low, because most of the people who set up shop for Porcfest did not show up until late Sunday. I intended to spend Bitcoin as much as I could during PorcFest. However, the first place I ate at only took dollars. I got chicken tenders and fries and they were terrible. Good news, is, later on, better food options opened up and the food was good from Sunday evening all the way to the end of the event next Sunday morning.

There were drones, presumably being flown for photography purposes. Which central Free State Project authority managed this? Silly question, Porcfest is full of people acting on their own. Who knows whose drone it was? Who cares? People step up and provide their own ideas and talent; that’s the Porcfest way. 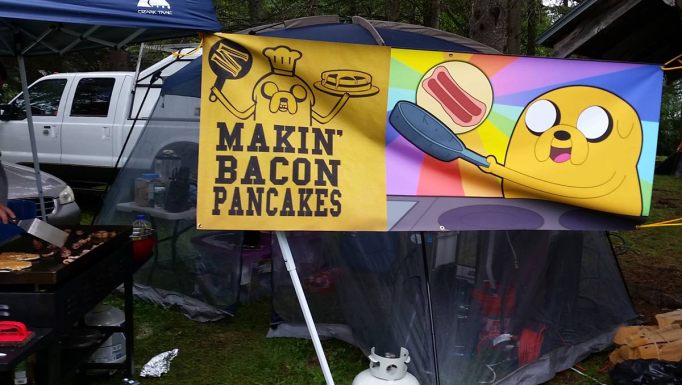 You may be cool and you may be having fun, but you will never be as cool and as fun as someone who is makin’ bacon pancakes. 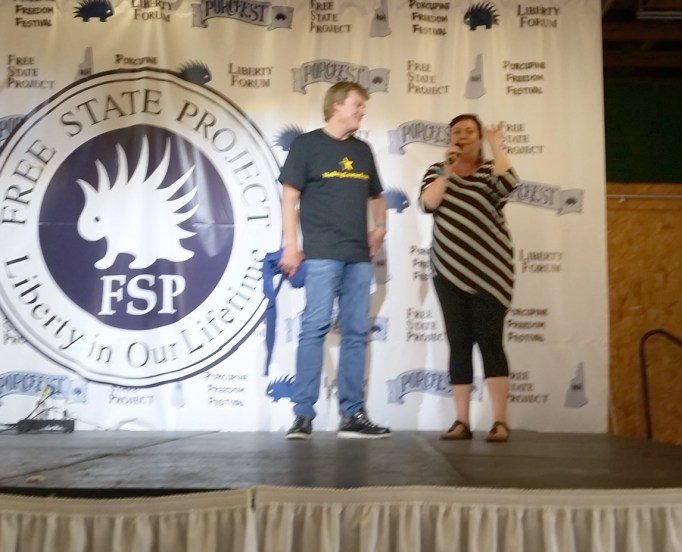 The Free State Project President standing with Patrick Byrne, letting the people in the audience know that the largest proportion of sales at Overstock.com using Bitcoin came out of New Hampshire. Byrne is the CEO of Overstock.com, who is getting behind Bitcoin because he supports what Bitcoin is, does, and represents. His business started accepting Bitcoin in January. 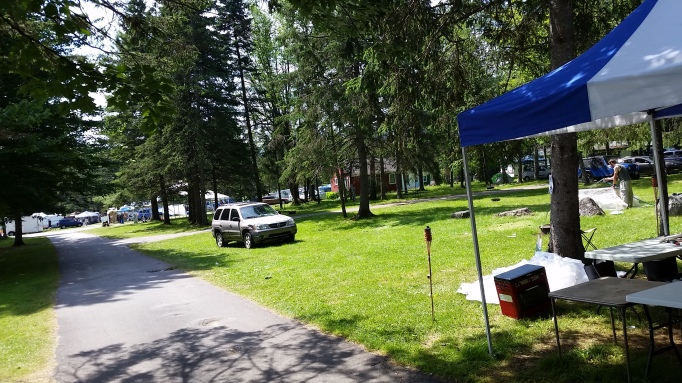 A nice scenery pic of PorcFest at Roger’s Campground in Lancaster, NH.

A sample of some of the topics of speeches: preppers/survivalists, publishing in the 21st Century, Islam and the Zero Aggression Principle, creepertarians, and transition towns. And some of the speeches, the speakers asked for audience participation. Porcfest is openly advertised as an informal event. 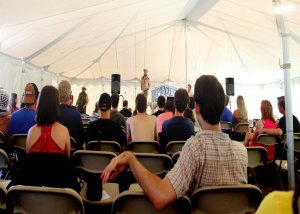 Speeches can fill up rooms. Or in this case, tents. (photo by James Babb)

There were panels where there were demonstrations of: making biltong (a cured meat originating from South Africa), CPR/AED, making chapstick, how to talk on talk radio, and encryption.

Unfortunately missing from this year was the “Soap Box Idol” and the “Roast Of ___” events. But that’s because nobody organized such an event! This is a do-it-yourself community and all that was needed for this kind of stuff is for somebody to step forward and choose to run such an event and bring the guests/speakers/panelists, set up signs, cover costs, do whatever needs to be done. People who wanted such an event to continue were free to step forward to volunteer to organize it. Sometimes you have to be the change you wish to see in the world (or week-long Free-Stater party in the woods).

Here’s a recording of the Soap Box Idol from 2011. The funny parts are not only what is spoken but what the judges have to say. People had 3 minutes to speak about anything and were scored by 3 judges. The “Roast Of” events were done in 2011 and 2012. First one, Stefan Molyneux was roasted and the year after that was Chris “Ron Paul’s Freaking Giant” Lawless.

The fact that people in charge of Porcfest were so laissez-faire about what kind of events could be held at Porcfest, seems to have resulted in such a wide variety of events. This is good! 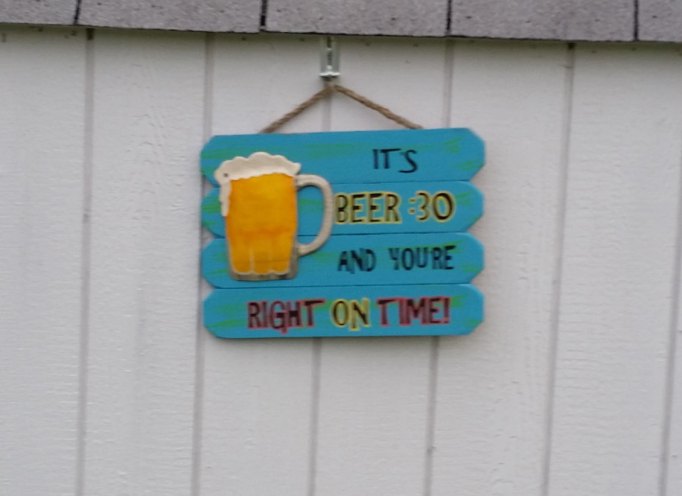 Sign on my next-door neighbor’s RV. They had the right idea!

I attended the Porcupine Freedom Festival, usually known as PorcFest. This is Porcfest XI. The event keeps getting bigger.

A table I saw next to the bathroom with an arbitrary collection of junk on it. What’s that I see to the left? A box…

The event was held at Roger’s Campground in Lancaster, NH. The White Mountains. The view of the stars at night, with no light pollution (no photos unfortunately), it was very nice. But enough about the location. This event lasted from Sunday June 22nd and ended the next Sunday. It was a week of fun!

…a box of condoms.

One of the things that happens at PorcFest is appearance by some big-name celebrities (e.g. people who became famous before PorcFest was a thing) like Jeffrey Tucker and Nick Gillespie but this is not the focus of this series, this is my story, my first time in New Hampshire, and I’ve decided that a first-person narrative is much more fun.

The Free State Project is allowing for the creation of an environment that humankind has NEVER BEFORE SEEN.

Concentrating people into the same area will establish an atmosphere that is optimal for the creation of outside-the-system businesses, setting up mutual aid, ostracizing individuals and organizations conducive to statism, providing moral/emotional/financial support to those who disobey the state, and create much easier opportunities for people to peacefully defy the state en masse.

-Don’t waste your time on things that aren’t profitable.
-If you can move a mountain, you can move a coffee cup.
-There is always some sacrifice, some cut that can be made, some other available option.
-If it’s worth doing, it’s got to be done right now.
-Don’t let things that are lesser than you control you.
-Turn your desire into results.
-Just being functional isn’t any kind of life at all.
-If brute force isn’t working for you, you’re not using enough brute force.
-80% of the effects come from 20% of the causes.
-Make a decision and stick with it.
-Play to win.
-You don’t have to do anything. Everything is a choice.
-Identify things that cannot be tampered with and those that can be. Tamper with them.
-Responsibility Assumption
-Discover what would really make you happy in this world.
-Absorb what is useful. Discard what is useless. Add what is uniquely your own.
-Know when to quit.
-If you take a problem as given, you will probably limit your solution space.
-Know what you want.
-The best way to get work done, is to do it.
-Let it go.
-Don’t hold on to your trump cards for too long.
-90% of everything is useless.
-Don’t walk when you can run.
-Become the authority and absolute final decision maker in your life.
-Don’t let a small problem get between you and the things that are important to you.
-If you can’t change the rules, then ignore them.
-Sharpen your saw.
-Follow a straight line.
-Don’t waste what life has given you. Put your talent to use.
-To live without purpose is just as good as not living at all.
-Become stronger than the you of yesterday.

No particular topic, but always dedicated to non-violence. No aggression, no exceptions.